Low vision is a condition in which the visual acuity or visual field is decreased to the point where glasses, contacts, or medical treatments cannot correct it to the level for which people can still do normal daily activities.

Understand Low Vision (What is LV?)

There is no hard rule for what actually qualifies as low vision. As stated above if a person has an inability to see well enough to do daily activities it could be considered low vision. So a person that has 20/20 acuity but has poor contrast sensitivity which makes it difficult to read could be what is considered low vision. Where as a person with 20/30 acuity and has no issues in daily life is not considered low vision visual acuity. When we define blindness and low vision the two are quite different. Although those that are legally blind most likely have low vision the opposite is not always the case. To be legally blind means that your better seeing eye is only capable of being corrected with glasses or contacts to 20/200. What this means is that the visually impaired person has to be at a minimum of 20 feet away to see an object that a normal seeing person can be 200 feet away from. Another limitation may be the visual field, it is also considered legal blindness if the field of view is only 20 degrees. A normal seeing person has at least a 140 degrees of visual field.

Oftentimes a person may have vision loss that is substantial in one eye from diseases such as macular degeneration. So the central vision may be partially or even completely gone in that eye. However if the other eye still functions normally and the patient can still see the things needed for normal daily activities then that person does not have what is low vision. Most of the time the brain will filter out the blur from the bad eye and use the input from the better eye. Unfortunately for some that isn’t always the case. In some cases the vision may just be blurred and it is combined with the clear vision of the other eye. This is a summation effect which causes the overall vision to be decreased and may end up being considered what is low vision.

To prevent Low vision is to prevent vision loss. Most vision loss comes from a few common eye diseases. Having regular eye exams will aid in the early detection of these common diseases. Regular physicals and check ups with your primary care physician is of great importance also. They will check your blood pressure, cholesterol, and most importantly your blood sugar. If these three things are uncontrolled the trifecta can be devastating to ocular and health.

The primary things to do to keep your eyes healthy is to keep your body healthy. Maintain a healthy body weight. Which will help keep your blood pressure, cholesterol and blood sugars under control. Eating a diet rich in antioxidants from fruits and vegetables helps to prevent low vision conditions like macular degeneration. Omega 3’s from fish is also one of the best things for your body. It fights inflammation which is a leading cause of many diseases.

Quit smoking! If you’re a smoker you are at least 4 times more likely to develop macular degeneration, it contributes to cataracts and can lead to glaucoma. It causes hardening of the arteries and increases blood pressure.

Protect your eyes. If you work or play in conditions where you could possibly damage your eyes, wear your eye protection. If you weld or grind metal protective shields and filters should be used. If you are active in sports, safety glasses or goggles should be worn.

Prevention of Low Vision and workplace safety go hand in hand. It is an employer’s responsibility to provide a safe work environment. Protective eyewear should always be worn in conditions that warrant it. You should make it a habit to always yours and encourage coworkers to also do so. This is not only a great way to prevent low vision and eye related injuries but to also avoid costly insurance claims and loss of productivity due to employees injuries and time of work.

Who are those suffering from low vision?

The National Center for Health Statistics reports that globally according to the (WHO) World Health Organization there are at least 2.2 billion people that are either blind or visually impaired. 1 billion of those people have vision loss that was preventable or is still to be treated.The most common causes of these visual impairments are cataracts and uncorrected refractive errors such as nearsightedness (myopia), farsightedness (hyperopia), astigmatism, and presbyopia.

Approximately 568,000 kids in the United States have some form of a vision impairment. This includes children up to the age of 17. This low vision statistic includes visually impaired kids who still can not see clearly even when wearing their best corrected prescription.

Of those 18 and older approximately 26.9 million reported having some form of vision loss in the year 2017. “Vision Loss” is loosely defined as people having trouble seeing even when corrected by contacts or glasses, this does not include those that are legally blind.

The most common diseases for low vision or vision loss globally were age related macular degeneration at 196 million, 76 million that have glaucoma, and 146 million with Diabetic retinopathy.

The majority of the people suffering from vision loss according to the low vision statistics and the WHO were those that didn’t get their vision conditions treated early enough. The knowledge of how to prevent low vision in your daily life along with the action of having routine eye exams will greatly aid in the prevention of low vision in your years to come.

Central vision loss is usually the result of damage to the macula. The macula is the area of the retina where the photoreceptors are the most densely packed. Similar to pixels on a TV, the more dense the photoreceptors or pixels the better the image or picture is. Our central vision is what allows us to see detail for such tasks as reading and writing, seeing street signs and recognizing faces. Central vision loss can be devastating to one's ability to function and do daily activities. Losing the ability to drive and read can lead to isolation and to depression. Although our central vision only makes up about 3 percent of our overall vision it is the most important part of our vision for maintaining our independence.

Symptoms of low vision can vary greatly. Because Low Vision is more of a term in regards to function, symptoms can be anything that decreases visual function and makes daily activities more difficult.

Blurred central vision is probably the most common symptom. However decreased peripheral vision isn't far behind.

Night blindness, light sensitivity, glare and even phantom vision can be common symptoms of different types of blindness and low vision.

Decreased contrast sensitivity requiring better lighting conditions and or some loss of color perception when the macula is damaged.

Phantom vision is also known as Charles Bonnet syndrome. This is where the brain starts to fill in images because the input from the eyes is decreased. The brain fills the void of the scotomas (blind spots) with stored memories or images. Once mental illness such as schizophrenia has been ruled out and there is considerable vision loss the diagnosis of Charles Bonnet Syndrome or Phantom Eye Syndrome can be made.

Think you may have a low vision problem?

Macular degeneration is the leading cause of vision loss in people over the age of 50. AMD Is caused by formation of deposits in the macula called drusen (dry amd). This causes a thinning of the retinal layers or atrophy. If these drusen get large enough they can break through a protective membrane that keeps fluid from the inner layers of the retina, this is when it becomes what is called wet macular degeneration allowing fluid to enter the inner layers. Once this happens those inner layers are starved for oxygen, this triggers new blood vessel formation. These new blood vessels are very tiny and fragile and easily break causing even more leakage.

Diabetic retinopathy is the overall leading cause of blindness and the second leading cause of central vision loss. Diabetic Retinopathy is caused by the blood having too much sugar in it and the sugar not getting into the cells to provide energy. This causes the cells that line the blood vessel walls and control the dilation of the vessels to be damaged and to allow the blood vessels to become leaky. This can also lead to new blood vessel formation which tend to be fragile and easily break causing even more damage.

Glaucoma is also a common cause of low vision in adults. Although it can affect children it is far more common in adults. This disease affects the peripheral vision and deteriorates from the outside in. Glaucoma causes the nerves of the retina to atrophy usually due to intraocular pressure choking off the blood supply to the nerves or from other systemic diseases decreasing the blood supply.

Retinitis Pigmentosa is a genetic condition that can be passed down from generation to generation. It is characterized primarily by peripheral vision loss and night blindness. It affects the rods of the peripheral retina which are responsible for movement and vision in low light levels. Most lose their vision slowly and don’t become completely blind. An even more rare form is called Inverse RP and affects the central vision.

Amblyopia and Strabismus are two common causes of low vision in children. These two conditions tend to go hand in hand as strabismus causes amblyopia, however there many other causes of amblyopia. Strabismus is a misalignment of the eyes or an eye turn. Amblyopia is caused when the brain suppresses the input from the turned eye so that you don’t see double. The suppression causes the brain cells that would normally be stimulated to atrophy due to lack of use. This is called amblyopia. The longer the eye is suppressed the worse the vision loss will become. Amblyopia can be somewhat reversed if the underlying condition is fixed and vision therapy is used.

Retinopathy of Prematurity is a potentially blinding condition in premature infants that is caused by abnormal blood vessel formation in the retina. Most ROP resolves without causing any damage to the retina, however when it is severe it can cause retinal drag or tension which can lead to retinal detachments and even blindness. Babies born before 31 weeks gestation and of low birth weight are at highest risk, they usually require oxygen which is what causes the abnormal blood vessel growth.

Acquired (traumatic) brain Injury can be a cause of low vision if the injury is along the visual pathway. Strokes can cause many forms of vision loss and low vision but often result in hemianopsia which is a peripheral visual field loss of usually half the field of vision.

Stargardt’s Disease is a form of macular degeneration and is a cause of low vision in children and young adults. It is a genetic disorder that is passed down from parents to their children. It is often referred to as juvenile macular degeneration. In this disease photoreceptors in the macula die off causing loss of central vision and color vision deficiencies.

Cataracts develop into several different types but the worst for central vision loss are posterior polar cataracts which are an opacity in the center of the lens of the eye. Nuclear cataracts cause a loss of contrast sensitivity, overall hazy vision and can contribute to night blindness. 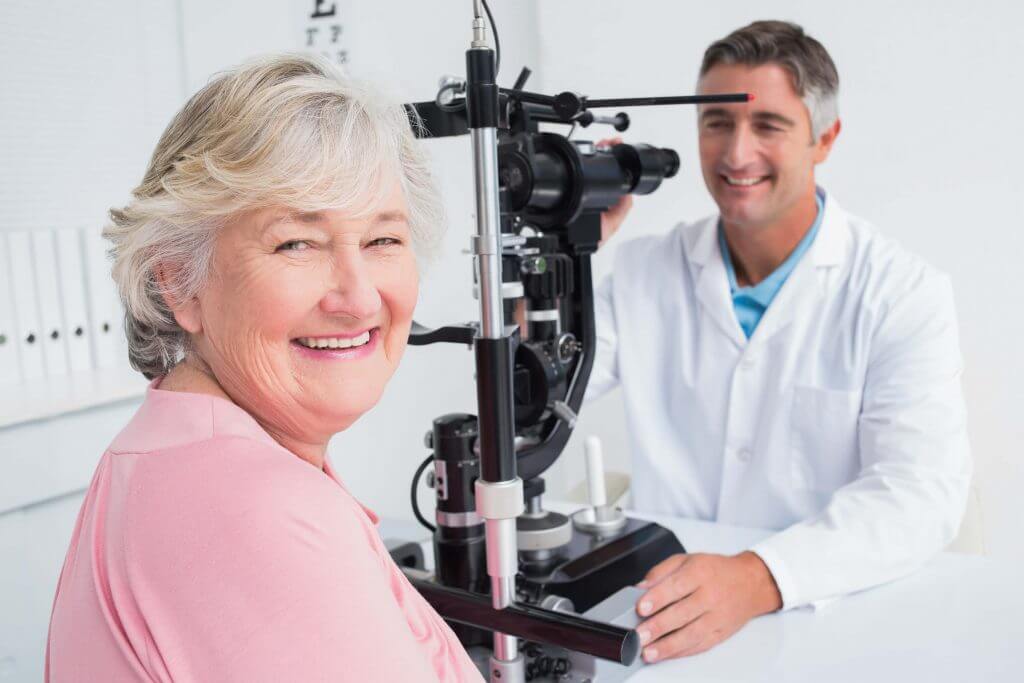